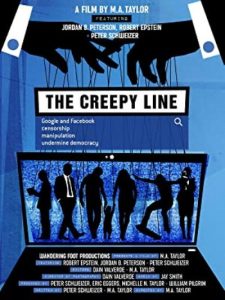 An eye-opening documentary, The Creepy Line reveals the stunning degree to which society is manipulated by Google and Facebook and blows the lid off the remarkably subtle – hence powerful – manner in which they do it.
The Creepy Line is a title culled from the words of former Google CEO Eric Schmidt, when during a 2010 interview he explained Google’s code of conduct: “The Google policy on a lot of things is to get right up to the creepy line and not cross it.”

The Creepy Line takes the conversation about data privacy and control further than ever before by examining what Google and Facebook do once they control a user’s data. Not only is this data sold to the highest bidder, but it is used it to mold, massage, and manipulate the public consciousness while influencing opinion on a vast scale – all with the goal of transforming society to fit their worldview.

This site uses Akismet to reduce spam. Learn how your comment data is processed.